Welcome back to my series of posts on Herbgrind, a dynamic analysis tool that finds floating point issues in compiled programs. The purpose of this series is to explain how Herbgrind works and the principles behind its design. To do that, we started with a simple hypothetical computer called the “Float Machine”, which is just enough to capture the interesting floating point behavior of a practical computer, like the one that’s probably sitting on your desk. Now, we’re bringing Herbgrind’s analysis to the real world, making it computable and fast.

If you missed the previous posts in this series, you might find this one a bit confusing, so I suggest you go back and read it from the beginning. If that’s too much reading, the post on building a valgrind tool has a short summary of the lead up, and introduces the Valgrind framework which this post builds on. In this post, I’m going to assume you know what I mean when I talk about “the Local Machine”, or “thread state”.

We’ve already talked a lot about the Real Machine, a machine that executes programs in parallel with their regular execution, but uses Real numbers instead of floating point ones. Thanks to the Real Machine, we can figure out the “correct” answer for a floating point program, and we can compare it to the one that gets computed by the program using floating point. This let’s us tell the user how much error each result had when all is said and done.

But just knowing that error is a problem isn’t enough; we need to enable the user to fix the error. The next machine, the Local Machine, tracks down where the error first appears, so we can go about fixing it. But not all the places where error appears are that bad: sometimes error appears in one place, but doesn’t get big enough to affect anything important, or ends up going nowhere. So the task of the Local Machine is twofold: figure out where error is coming from, and figure out where it goes.

Where Error Comes From 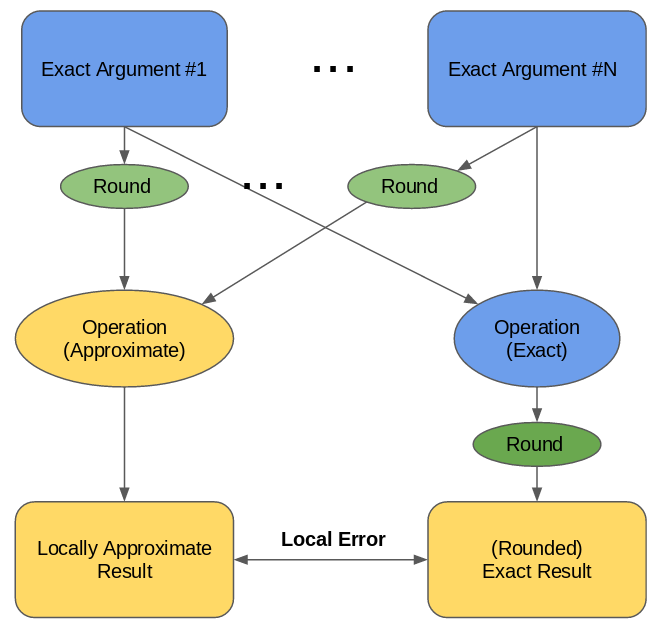 Doing this in on a practical computer, using the Valgrind framework, is pretty straightforward. We already know from the last post that we have shadow values for each argument, sitting around in memory somewhere. VEX only allows operations to be executed on temporaries (values in memory or thread state have to first be moved to temporaries), so we don’t have to consider the case where the shadow value is in the memory hash table, or thread state shadow storage. When we see an operation whose local error we want to evaluate, we know that the exact values of its arguments are in the shadow temporaries that correspond to its argument temporaries.

MPFR provides an API for taking an exact shadow value, and rounding it to a double- or single- precision float. There’s a lot of flexibility in how you do this (so many rounding modes…), but we just round down all the time.

For operations which aren’t a single instruction, but are instead a wrapped library call, we don’t have an instruction code to look at, but instead use the type of the function that was called. In libm (and any implementation of math.h, the standard API for math libraries in C), there are generally two versions of any function, one for double precision (the default, for instance sqrt), and one for single precision (usually with a suffix of f, like sqrtf).

Once we’ve got the exact arguments rounded, we just need to run the “normal” operation on them, and compare the result to the exact answer. When the original operation is something basic like addition, or division, we can do this using the built in operators in C, as long as we make sure to specify the types in the right places. We saw in the last post that because of the way Valgrind interacts with the C standard library, when the original operation is a library call we can’t run the “normal” by just calling the original libm implementation, but luckily we’ve already set up the machinery to call the OpenLibm implementation instead. OpenLibm, as a fully functional implementation of math.h, also includes the single-precision versions of all the functions.

So the steps to computing local error are:

Once we can compute the local error for each operation, we can figure out where the error in a program is “coming from”, by just looking for the operations with lots of local error! The local error of different operations doesn’t interact, since we start from exact arguments every time, so we get a good measure of the error that arises from that operation alone.

The second job of the local machine is tracking the “influence” of erroneous code on the final results of the program. Without this, we could report all the sources of error to the user, but we wouldn’t know which ones were important, and which ones end up going nowhere.

In the original Local Machine post, for the abstract Float Machine, we talked about tracking these influences through a “taint analysis”; which means we generate a “taint” on some event, and propagate that taint (copy it) from the arguments of certain operations to their results. In the case of our local error analysis, we generate a “taint” every time we see local error above some threshold (5 bits by default1). And at every operation we shadow, we copy the taints from the arguments to the result.

With this system we can figure out which operations with error influenced each other, but we still have to figure out which values are “outputs”, in that we care about their results for program correctness.

Originally in Herbgrind we asked the user to mark these values explicitly, but that involved a lot of manual labor, and required understanding the program that you wanted to analyze, which we don’t always want to make a requirement. So instead, we now automatically infer the outputs of the program based on a couple of conditions.

The intuition behind this system is that you only care about floating point values you can “see”; out of sight, out of mind. While you’re doing operations on floating point values, they are just bits in memory, so it doesn’t yet matter how accurate they are. It’s only when you use them to change observable behavior that you care about their accuracy. There are a few ways you can “observe” floating point values: you can print them to the screen, you can compare them to another value to make some sort of decision in the program, or you can convert them to an integer. The last one might seem a little weird, since integers are still just bits in memory, and aren’t necessarily directly observable, but any integer might become observable later, and so to avoid having to track integer values, we just flag floating point values on a conversion to int as well. Luckily these conversions are infrequent enough to avoid overwhelming the user with “fake” outputs.

Detecting each of these “observation” events involves a slightly different mechanism. For the first event, printing of floats, we do a similar trick as with math wrapping from the previous post, but instead of wrapping functions like sqrt, we wrap the printing functions like printf2. To detect comparisons, we just look for instances of the VEX compare instructions, and to detect conversions to integers we look for the VEX instructions which convert floating-point values to integers.

Putting it All Together

To give the user the most complete picture of the error’s impact, we want to tell them, for each observation:

Counting how often each observation point is hit is pretty easy: we just have an integer counter in its record, and increment it every time we hit the observation. Keeping track of the influences is slightly more complicated, but we’ve outlined above how that happens. Tracking the accuracy, though, gets a little tricky.

That’s pretty much it for local error! I think the transformation from the abstract Local Machine to an actual implementation is simpler than some of the other implementations; so much of the complexity is captured in the abstract model.

For a final closing blurb, I recently designed a new “drawing” version of the Herbgrind logo, a little more cleaned up than the photo version, for using on slides and such. Here’s its official debut:

See you next time!